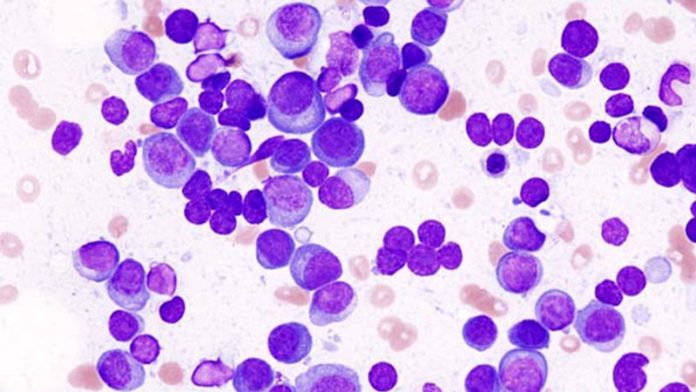 The US Food and Drug Administration (FDA) has issued a partial hold on all ongoing clinical trials of venetoclax (Venclexta/Venclyxto, AbbVie) in the treatment of multiple myeloma, owing to an excessive number of deaths in the BELLINI study, according to a press release from the drug’s manufacturer.

This does not affect the use of venetoclax with regard to its already approved indications, which include chronic lymphocytic leukemia and acute myeloid leukemia.

Multiple myeloma is not an approved indication for the drug, but venetoclax has shown promise in this disease in phase 2 trials, and it was being investigated in the larger phase 3 trial known as BELLINI (NCT02755597).

This trial compared venetoclax with placebo when both were added to treatment with bortezomib (Velcade, Millennium Pharmaceuticals) and dexamethasone (multiple brands) for patients with relapsed or refractory multiple myeloma.

Although the trial met its primary endpoint of significantly improved progression-free survival (PFS), it also showed that patients who received venetoclax were at a twofold higher risk for death compared with those who received placebo and that the rate of treatment-emergent adverse events was higher.

In its press release, AbbVie noted that as a result of the FDA partial hold, no new patients should be enrolled in any studies of venetoclax for multiple myeloma until a further analysis of the data is completed. Patients who are currently enrolled in studies and who are receiving benefit from the therapy may continue with treatment, after consultation with their physician, it adds.

“We are committed to patient safety and are thoroughly analyzing the results observed in the BELLINI trial. We will continue working with the FDA and worldwide regulatory agencies to determine appropriate next steps for the multiple myeloma program,” said Michael Severino, MD, vice chairman and president of AbbVie, in the press statement.

AbbVie has noted that it has informed investigators involved in clinical trials with venetoclax for the treatment of multiple myeloma about the partial hold and that it will work with them to proceed as appropriate in the best interest of each patient who may be receiving benefit from venetoclax and who elects to continue receiving treatment.

Multiple myeloma expert S. Vincent Rajkumar, MD, of the Mayo Clinic, Rochester, Minnesota, said that the FDA news comes as a major and unexpected setback for the development of venetoclax for patients with multiple myeloma.

When asked about the FDA’s decision for a partial hold, Rajkumar said he was confident that the FDA had made the right decision on the basis of the data it had reviewed.

“We need to dig deeper into the data and determine why the excessive deaths in patients on venetoclax occurred,” commented Rajmukar. He speculated that venetoclax may alter the biology of the disease or that the drug may be associated with a disruption of the immune system related to tumor growth.

“This is a teaching moment, a sobering moment for clinicians treating multiple myeloma who like to use drugs and regimens based on promising, uncontrolled, phase 2 studies,” he told Medscape Medical News.

He noted that venetoclax was used off label for patients with multiple myeloma on the basis of data from phase 2 studies. Physicians who are using venetoclax off label should be cautious in the continued use of the drug and should talk with their patients about the pros and cons of treatment.

He noted that patients with the t(11;14) translocation had impressive responses with venetoclax in earlier studies. “But we need to be sure that these responses translate to improved overall survival,” he emphasized. “We need more clarity and more information to determine whether venetoclax can benefit a subset of patients.

“For now, I would personally stay away from using it for the treatment of myeloma until I have compelling evidence of clinical benefit,” Rajkumar said. “I cannot recommend its off-label use in myeloma,” he added.

The BELLINI study was conducted in patients with relapsed or refractory multiple myeloma who had already received one to three lines of therapy. They were randomly assigned to receive either venetoclax or placebo together with bortezomib and dexamethasone.

However, the safety of venetoclax was called into question in the preplanned analysis. Patients in the venetoclax arm had a twofold increased risk for death from treatment-emergent adverse events.

Among the patients in the placebo arm, one death (1.0%) was treatment emergent and occurred less than 30 days after the last dose of study drug.

Sepsis, pneumonia, and cardiac arrest were reported to be frequent causes of death not related to disease progression for patients receiving venetoclax.