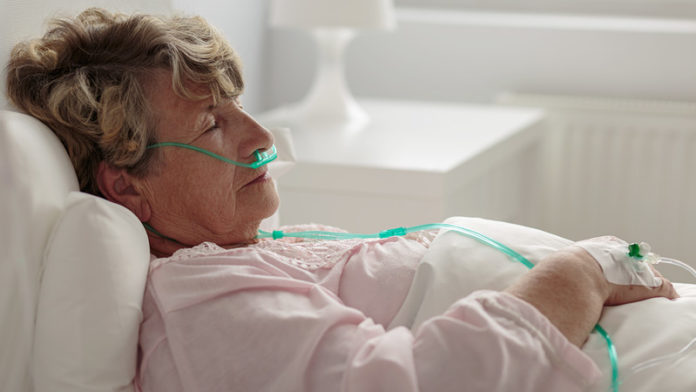 Alarm has been raised over the occurrence of severe immune-related adverse events (irAEs), which required hospitalizations, in some patients with advanced lung cancer who had been treated with immunotherapy with checkpoint inhibitors followed by osimertinib (Tagrisso, AstraZeneca).

Osimertinib is one of the newest in a class of tyrosine kinase inhibitors (TKIs) that target the epidermal growth factor receptor (EGFR) in non–small cell lung cancer (NSCLC).

The study, by researchers from the Memorial Sloan Kettering Cancer Center (MSKCC) in New York City, was published online March 7 in Annals of Oncology.

The team notes that serious irAEs were seen when osimertinib was given after immunotherapy in 6 of 41 patients (5%). The adverse events included severe cases of pneumonitis, colitis, and hepatitis; 5 of the 6 patients required hospitalization.

“The clinical relevance of the findings [interactions between immunotherapy and osimertinib] have prompted us to report these findings now to facilitate expeditious community awareness, but larger studies are needed to more definitely determine the incidence of irAEs,” corresponding author Matthew D. Hellmann, MD, and colleagues note.

“Awareness of this potential interaction is needed to minimize inadvertent toxicity and to determine strategies to optimally select and sequence therapies for patients with advanced lung cancers,” they write.

Approached for comment, Suresh S. Ramalingam, MD, director of the lung cancer program at Winthrop Cancer Institute, Emory University, Atlanta, Georgia, who was the principal investigator of the pivotal FLAURA trial that led to osimertinib’s approval, told Medscape Medical News that he has not seen these toxicities in his clinical practice.

“We note the findings of this paper with great interest; this will prompt us to search our database to determine if any such events have occurred in our patient population. I do not recall such a situation in our practice,” he said.

However, Alice T. Shaw, MD, PhD, of Massachusetts General Hospital in Boston, said her group has made similar observations regarding osimertinib as well as other targeted agents administered after immunotherapy.

“I think this is a very important topic and is broader than just osimertinib,” Shaw told Medscape Medical News.

Her group has reported on immune-related hepatotoxicity in 45.5% of patients who received crizotinib (Xalkori, Pfizer), an ALK/ROS1/MET inhibitor, after immunotherapy.

Anecdotally, Shaw has also seen higher rates of rash and hepatotoxicity with sequential immunotherapy and use of another EGFR inhibitor, alectinib (Alecensa, Genentech).

“In general, these toxicities have the potential to be severe, requiring hospitalization, and may lead to TKI interruption and even TKI discontinuation, compromising the patient’s ability to receive effective targeted agents,” Shaw commented to Medscape Medical News.

The earliest observations were made by Japanese researchers analyzing a database of 20,516 patients with NSCLC in the US Food and Drug Administration Adverse Event Reporting System database, Shaw pointed out. Oshima and colleagues noted a higher incidence of pneumonitis with nivolumab (Opdivo, Bristol-Myers Squibb) and EGFR TKIs, Shaw said.

In addition, a phase 1b study (TATTON) that was evaluating the concurrent use of durvalumab (Imfinzi, AstraZeneca), an anti–programmed death receptor 1 ligand, and osimertinib had to be halted owing to the high rates of interstitial lung cancer.

In the latest study, Hellmann and colleagues identified all patients who were treated at MSKCC with ICIs and an EGFR TKI between March 2011 and September 2018. Demographic and clinical information was extracted from the medical and pharmacy records. Clinical notes, radiology reports, and hospitalization records were also reviewed.

A total of 126 patients were identified as having received 180 distinct sequential drug exposures. Patients received immunotherapy with nivolumab, pembrolizumab, atezolizumab, or durvalumab. During the course of their disease, patients also received EGFR inihibitors, including erlotinib, osimertinib, afatinib, and gefitinib.

Of the six patients, three received immunotherapy first line in the metastatic setting followed by an EGFR TKI.

There were additional cases of indeterminate irAEs, each requiring hospitalization for shortness of breath and empiric treatment with a combination of steroids and antibiotics.

Except in one case, the irAEs were seen within the first few weeks after starting osimertinib (median, 20 days; range, 14 – 167 days). In most cases, the period from the last dose of the immunotherapy to the start of osimertinib was short (median, 23 days; range, 17 – 299 days).

Of the 20 patients who received erlotinib after an ICI, none developed an irAE.

Lung cancer expert Tony Mok, MD, from the Department of Clinical Oncology at the Chinese University of Hong Kong, told Medscape Medical News that on the basis of early data from the TATTON trial, these new findings do not come as a surprise and that they provide the time frame of 3 months between sequential treatment, which may help clinicians.

“It is not surprising that sequential immunotherapy followed by osimertinib might lead to higher rates of pneumonitis,” Shaw said. With this particular sequence, patients are exposed to both an ICI and osimertinib simultaneously, she explained.

The half-life of osimertinib is 55 hours; when it is given before an immunotherapy, there is little opportunity for overlapping toxicities.

The take-home message for clinicians is to use targeted therapy first, then immunotherapy, Ramalingam commented to Medscape Medical News.

Ramalingam elaborated. Osimertinib yields the best median progression-free survival — approximately 19 months — when used as first-line therapy. Moreover, it is effective against brain metastasis and has the most favorable safety profile among all EGFR TKIs.

“For these reasons, it is our strong feeling that osimertinib is the preferred first-line therapy for patients with EGFR mutation,” he said. “To the contrary, the role of immune checkpoint inhibition is unproven in the EGFR-mutated patient population; therefore, treatment decisions should not be driven by considerations regarding use of immunotherapy in this patient subset,” he added.

Shaw concurred. “Based on FLAURA, we use osimertinib first line,” she said. She also pointed out that this is a category 1 preferred recommendation for advanced EGFR-mutant NSCLC in the National Comprehensive Cancer Network guidelines.

In a Medscape commentary, there was unanimous agreement that for patients with advanced NSCLC with EGFR mutations, targeted therapy with an EGFR TKI is the first option. “If you have an EGFR mutation, your best therapies are EGFR-targeting TKIs. Immunotherapy has no current role,” Sandip Patel, MD, said. Patel is from the UC San Diego Moores Cancer Center, La Jolla, California.

“To give the two [immunotherapy and targeted therapy] sequentially, we didn’t have data on the ‘safe’ temporal relationship. Based on common sense, we have tried to keep the two about 4 to 6 weeks apart,” Mok said. “This article has helped to establish the temporal context of 3 months [as a safe interval for sequential treatment of immunotherapy and targeted therapy], but this may not be practical, as the disease may not wait,” he added.

Shaw told Medscape Medical News that in clinical practice, results of testing for programmed cell death ligand–1 may be available faster than results of genetic tests (eg, for EGFR, ALK, ROS1, and BRAF alterations). In addition, tissue may be insufficient for genotyping, thereby prompting initiation of animmunotherapy before genotyping-directed TKIs.

“Though per guidelines, we should be waiting for molecular testing to identify EGFR and ALK mutations, oncologists are using chemotherapy with immunotherapy or immunotherapy alone very quickly as first-line therapy these days, even before we have molecular testing back,” Shaw said. When testing results show EGFR or ALK mutations, patients will often be switched to a targeted therapy, she added.

It is likely not the ideal way to proceed in the clinic, she suggested.

Shaw described a likely clinical scenario. “If we have a newly diagnosed, never-smoking patient with metastatic NSCLC (a patient likely to harbor a targetable genetic alteration), and this patient needs to start treatment immediately (due to extent of disease and/or symptoms) before we can get genetic testing back, we will usually opt to proceed with standard chemotherapy and hold off on chemotherapy combined with immunotherapy or immunotherapy alone, given the reasonably high chance that the patient may have a molecular target such as EGFR, ALK, or ROS1 and will transition to a targeted therapy,” she said.

Ramalingam addressed a scenario in which a patient with resectable NSCLC receives immunotherapy followed by an EGFR TKI, and the disease then progresses to metastases. He noted that the benefit from immunotherapy in surgically resected early-stage NSCLC remains under evaluation. The ALCHEMIST program, which is funded by the National Cancer Institute, excludes patients with EGFR mutation and ALK gene rearrangement from undergoing immunotherapy; such patients are randomly assigned to receive TKI or to undergo observation, he explained.

“Immunotherapy has yet to be shown to benefit EGFR-mutated patients when given as a single agent,” Ramalingam said. “For all of these reasons, the current practice does not reflect the situation noted in this paper with regards to early-stage NSCLC,” he added.

But for locally advanced, unresectable stage III disease, all patients with NSCLC may receive durvalumab as standard practice, irrespective of EGFR status, Hellmann and colleagues point out.

“These approaches may have important consequences on the safety of future use of osimertinib in patients with EGFR mutant NSCLC,” they write. They note that if osimertinib is subsequently used in these patients, they should be closely monitored for irAEs, especially if the period between treatment with ICI and treatment with osimertinib is less than 3 months.

Clinicians should be aware of and vigilant regarding the potential toxicities when targeted therapies are given after immunotherapy, Shaw said. On the basis of published reports and their own clinical practice, Shaw and her team have been cautioning oncologists about this particular sequence.