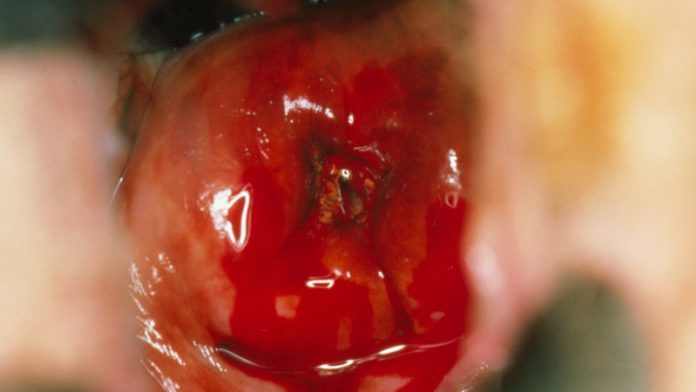 HONOLULU — Thermal ablation delivered via a portable, battery-powered, low-cost device is at least as effective as standard cryotherapy and loop electrosurgical excision (LLETZ) at treating precancerous lesions in the cervix and is associated with less pain and cramping than the other two procedures, a randomized controlled trial suggests.

Importantly, thermal ablation can be administered by nurses and is easily taught, obviating the need for physician involvement and delays in care in countries where resources are scarce or nonexistent, the study also indicates.

“The whole goal is to plan to find low-cost technology that is easy to implement and that is effective in the treatment of cervical precancers,” senior author Groesbeck Parham, MD, University of North Carolina at Chapel Hill, told Medscape Medical News.

“And this battery-operated, thermal coagulation machine is critical to increasing access to treatment of cervical cancer in countries such as Zambia, where you are talking about a cervical cancer crisis that is taking the lives of many women every single year,” he added.

Results from the trial were presented here at the Society of Gynecologic Cancers (SGO) Annual Meeting 2019.

The trial was conducted in Lusaka, Zambia.

Lead author Leeya Pinder, MD, University of Washington Medical Center, Seattle, explained that a cervical cancer prevention program was established in Zambia in 2005 to counteract the cervical cancer crisis that was emerging there, largely because of the lingering HIV/AIDs epidemic in the country. It is one of the largest programs of its kind in sub-Saharan Africa. Each year, more than 600,000 women are screened for cervical lesions.

Cryotherapy is an effective strategy for the treatment of cervical lesions, but in a country such as Zambia, there are multiple challenges to using it, Pinder noted. For example, the gas needed to perform cryotherapy is very expensive, and the supply chain for providing the gas is often unreliable. In addition, the electrical power supply can be unreliable.

Because of these challenges, “you really have to think outside the box,” Pinder commented. Such problems led them to consider the use of a battery-operated, handheld, thermal ablation device as part of their “screen and treat” program in Zambia.

The pilot phase of the study enrolled 750 women. All of the women were found on visual inspection with acetic acid (VIA) to be positive, and all were eligible to undergo ablation.

Many were also positive for human papillomavirus (HPV), she added.

The patients were randomly assigned to undergo either thermal ablation, cryotherapy, or LLETZ. Discomfort levels during treatment as well as the acceptability of the procedure were assessed.

“There really were no differences in terms of side effects between thermal coagulation and cryotherapy,” Pinder reported.

There were no differences in other side effects, including rates of vaginal bleeding. All procedures were reportedly acceptable to the patients.

Only about 60% of women who had initially been treated were available for analysis at the 6-month follow-up point.

On repeat VIA screening, “the majority of women had no evidence of disease, and there were no differences across the board among the treatment arms,” Pinder noted.

At 6 months, treatment success rates were 82% in the thermal ablation group, 77% in the cryotherapy group, and 81% in the LLETZ group.

On the basis of VIA results, there were no significant differences between the treatment arms at 6 months with respect to clearance rates of HPV 16, 18, and 45 (for thermal ablation, 78%; for cryotherapy, 77%; and for LLETZ, 79%).

However, there were differences in treatment outcomes between women who were HIV positive relative to those who were HIV negative.

For example, if a woman was HIV negative, there was a 91% cure rate at the 6-month follow-up point, and there were no significant differences in cure rates between the three treatment arms.

This compared to a cure rate of only 72% if a woman was HIV positive, with no differences between the three treatment arms, Pinder noted.

There were also no differences between the treatment groups among HPV-positive women whose infections cleared after ablation.

On the other hand, there was a slight signal that for women who had been treated with cryotherapy, clearance rates of HPV 16 were lower than for the other two treatment arms, Pinder indicated.

The benefits of thermal ablation are readily apparent, Pinder commented. Firstly, treatment takes only 45 seconds, compared to 12 to 15 minutes for cryotherapy.

Nurses report that the handheld device is very easy to use, and patients do not require a local anesthetic, as they do with LLETZ.

LLETZ also requires special training to perform and is much more involving than either thermal ablation or cryotherapy, Pinder noted.

“We do have challenges with our HIV-positive population in that we are having difficulty regardless of the type of treatment we offer clearing these infections,” Pinder told Medscape Medical News.

“So we still need to figure out how to best manage our women who are HIV positive,” she acknowledged.

“But so far, thermal ablation seems to be safe and acceptable when compared to cryotherapy,” Pinder concluded.

Asked by Medscape Medical News to comment on the portable technology, session co-chair Teresa Diaz-Montes, MD, PhD, Mercy Medical Center, Baltimore, Maryland, noted that there are many barriers to testing women for precancerous lesions in resource-poor countries such as Zambia.

Lack of a reliable source of electricity is only one of the many barriers women face in accessing simple preventive healthcare, she suggested.

“We might take electricity for granted, but in Zambia, they cannot,” Diaz-Montes said.

Moreover, in Latin America where Diaz-Montes works, it can take many hours for women to travel to centralized health services where they can be tested and treated for precancerous lesions.

“These women don’t have a car, so we need to find ways that we can easily take the technology with us to test them where they are, and train others to do it as well,” Diaz-Montes observed.

“So I think this is a great idea because it will solve a lot of problems that serve as a barrier to women getting screened and treated,” she said.

The investigators and Diaz-Montes have disclosed no relevant financial relationships.

Changing Landscape of Uterine and Ovarian Cancer in the US