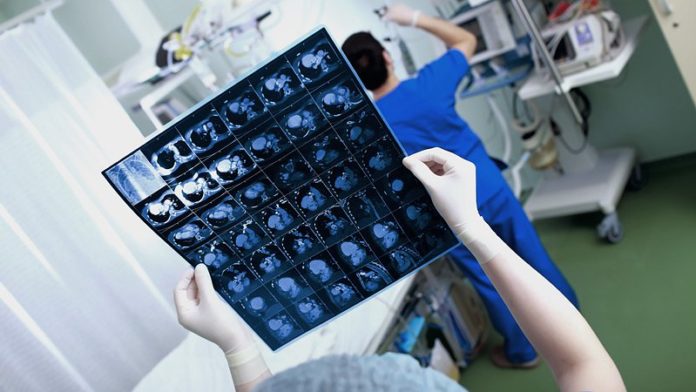 NEW ORLEANS — About one in three CT scans performed for cancer also shows coronary artery calcium (CAC), but the finding makes its way into the radiology report only about half the time, suggests a retrospective study.

Statins or aspirin are prescribed in very few such cases, the analysis also suggested.

The findings — a prelude to further exploration of whether reporting CAC influences clinical outcomes — point to an “under-recognized opportunity for action” for treating coronary artery disease (CAD) in patients who might soon be receiving potentially cardiotoxic chemotherapy, the authors conclude.

“In these patients who are already undergoing CT scans to evaluate their cancer, this could be some valuable information that we can obtain that doesn’t pose any further risk to the patient, it doesn’t expose them to any more radiation,” lead author Matthew C. Hooks, MD, University of Minnesota, Minneapolis, told theheart.org | Medscape Cardiology.

Hooks is slated to present the analysis March 18 at the ACC 2019 Scientific Session (ACC.19). He said his group is also collecting data from the same cohort on their downstream incidence of coronary catheter interventions and clinical events, to be reported in the future.

“In my experience, a lot of radiologists don’t have a background in cardiac imaging” and might be less likely to include cardiac and coronary findings in reports on cancer patients, Juan C. Lopez-Mattei, MD, University of Texas M.D. Anderson Cancer Center, Houston, said in an interview.

Others might report coronary calcifications “but they’re not very consistent about it,” said Lopez-Mattei, a cardiologist with a joint appointment in diagnostic radiology who is not connected with the current study.

The analysis is a reminder to include any CAC findings in CT reports, recognizing that it won’t always make a clinical difference, he said. “Certainly I think it would be helpful to the clinician to at least say whether it’s present or absent.”

Whether that should lead to statin or aspirin therapy is a more ambitious question requiring a much larger, prospective study. There is virtually no randomized-trial guidance on whether treating cancer patients for incidentally identified CAD, especially CAD that isn’t otherwise suspected, will improve outcomes, Lopez-Mattei noted.

Hooks agreed that the current analysis only starts to address the bigger question of whether including the CAC information matters. “Should we be making treatment recommendations and chemotherapy recommendations based on the presence or absence of this finding on the CT scan?”

For the study, he and his colleagues did their own review of disease-staging CT scans from 1001 patients at least 45 years of age with various cancers who were to begin treatment with an anthracycline and/or trastuzumab (Herceptin, Genentech/Roche), both of which can be hard on the heart. They measured any CAC with Agatston scores and examined electronic medical records to see whether CAC was originally reported and led to any clinical decisions.

CAC was seen on scans from 349 patients, or 34.9% of the cohort. But CAC was included in the CT clinical reports for only 178 patients, or 51% of the subgroup. Only 24 of the patients were referred to a cardiologist, five patients received a first prescription for aspirin, and three received new prescriptions for a statin, reported Hooks.

Hooks acknowledged that these data don’t say whether the three patients newly put on statins were among the 178 with CAC on their original CT reports.

Also, he noted, there might be tenable reasons for omitting a CAC finding from the formal report and, separately, for not prescribing a statin or aspirin. For example, perhaps no need was seen to include CAC information for patients already on statins or with known coronary disease.

And statins or aspirin might be deemed inappropriate for patients with advanced liver disease, depressed platelet function, a history of severe bleeding, or aggressive or end-stage malignancies.

Indeed, without data on cancer stage and other clinical context, “it’s difficult to conclude that not reporting on coronary artery calcium could affect long-term survival,” Lopez-Mattei said. If a patient has a hard-to-treat cancer like pancreatic or a sarcoma, for which the prognosis is often poor, identification of CAC may make little difference, he agreed.

On the other hand, some malignancies are very treatable. Breast cancers and lymphomas, for example, made up about half the current cohort. So in many cases, said Lopez-Mattei, “depending on the prognosis, starting on a statin and aspirin can definitely be of benefit.”

Neither Hooks nor his coauthors had disclosures. Lopez-Mattei discloses receiving honoraria from Arterys.