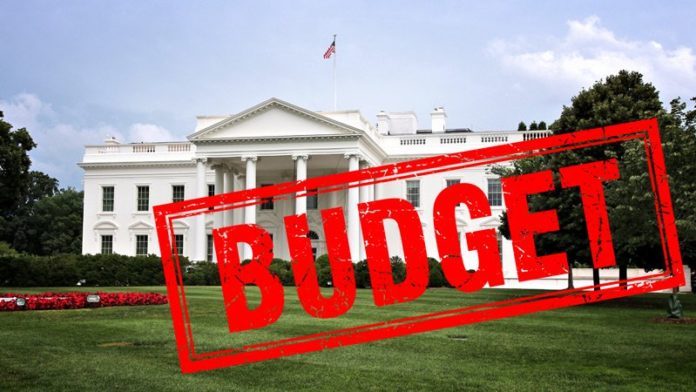 WASHINGTON — The Trump administration on Monday unveiled in its proposed budget a bid to make a sizeable cut in total funding for federal health programs and also pressed for Medicaid block grants and expansion of its work rules.

The White House released an overview of its request to Congress for fiscal 2020, which begins in October. In its presentation, the White House highlighted funding proposals for certain pressing public health concerns, including stemming the misuse of opioids.

In total, the White House is seeking $87.1 billion for the Department of Health and Human Services (HHS), which it describes as a cut of 12% from the 2019 estimated level.

Within this HHS reduction is a proposed cut of the National Institutes of Health (NIH) budget by $4.5 billion to $33.4 billion in fiscal 2020, according to an HHS summary of the fiscal 2020 request. In a White House document, the Trump administration said the NIH has been provided with “upfront funding for certain projects in recent years and would continue this approach in 2019 and 2020 to facilitate efficient management of NIH resources across multiple years.

“With this investment, NIH would continue to address the opioid epidemic, make progress on developing a universal flu vaccine, and support the next generation of researchers,” the White House said.

The proposed NIH cut drew quick protest from Lisa Lacasse, president of the American Cancer Society Cancer Action Network. She noted that the budget would mean a cut of nearly $900 million for the National Cancer Institute (NCI).

“If passed, the proposed cut to NIH and NCI funding would squander years of renewed momentum and progress in advancing discovery in cancer and other chronic diseases,” Lacasse said in a statement.

The NIH is widely popular with lawmakers in both parties. Senate Appropriations Chairman Richard C. Shelby (R-AL), for example, last year emphasized the fiscal 2019 funding of $39.1 billion for the NIH as a highlight of a major spending package.

The White House peppered its releases with funding figures for other health issues. For combating opioid abuse, the White House said it is seeking $4.8 billion for HHS to “sustain critical investments in surveillance, prevention, treatment, recovery support services, and research.” As indicated in a fact sheet on the response to the opioid crisis, the White House also included $8.6 billion in funding for a border wall.

The White House said it is seeking to provide the US Food and Drug Administration (FDA) with $6.1 billion, which it described as $643 million more than the 2019 estimated level. This includes $55 million for efforts related to the opioid crisis. The White House budget documents also refer to a multiyear initiative focused on ending the HIV epidemic in America by 2030, with $291 million proposed for the effort for fiscal year 2020.

The budget also involves a cut of more than $1 billion from last year’s global allotment to the President’s Emergency Plan for AIDS Relief, a program started by President George W. Bush.

The White House budget serves as a starting point for creating annual appropriations bills that fund federal agencies. HHS Secretary Alex Azar will appear Wednesday before the House Labor-HHS-Education subcommittee to defend the fiscal 2020 proposal. The debate at this hearing likely will preview the fights ahead on spending, with funding for gun safety research seen as a probable point of contention.

House Labor-HHS-Education Chairwoman Rosa DeLauro (D-CT) and House Appropriations Chairwoman Nita M. Lowey (D-NY), the leader of the full appropriations committee, have for years been trying to strike language from an annual funding bill that has limited research on gun safety.

The White House also used the budget outline to stake positions in larger policy debates that extend beyond the annual appropriations process. The Trump administration included proposals for major and relatively minor changes to Medicare and Medicaid policies.

There’s no hard deadline for Congress to resolve these matters, as there is with the annual clock on appropriations. The White House’s budget document reflects policy debates about the two giant federal health programs. Even mentioning proposals in budget documents gives proponents of certain policy changes added clout in debates.

For Medicaid, the White House said it is seeking to require “able-bodied, working-age individuals to find employment, train for work, or volunteer (community service) in order to receive” Medicaid. This would make the massive federal-state health program operate more like the Temporary Assistance for Needy Families program, the White House said.

It estimated potential savings of $130.4 billion over a decade from the implementation of a “Medicaid community engagement requirement.” Arkansas has been a leader among US states in seeking to tie the health benefit to an employment requirement.

Researchers at the liberal-leaning Center on Budget and Policy Priorities noted that the expected savings would be due to people leaving Medicaid because of an expansion of work requirements.

In Arkansas, the first state to take coverage away from people who did not meet a work requirement, more than 1 in 5 people subject to the requirement lost their coverage in the first 7 months that the policy was in place, Hannah Katch, a senior policy analyst at the Center on Budget and Policy Priorities, told Medscape Medical News in an email.

“In particular, the proposal to take Medicaid coverage away from people nationwide who don’t meet a work requirement would have a devastating effect on access to care for many low-income people — including the vast majority of Medicaid beneficiaries who are working, are caregivers, or have chronic health conditions that prevent them from working,” Katch said.

In the fiscal 2020 budget request, the Trump administration also backed an idea that has been popular with conservatives in Washington for many years. The White House budget outline proposes “comprehensive Medicaid financing reform” by a switch to per-capita cap or block grants.

“A new Federal-State partnership is necessary to eliminate inefficient Medicaid spending, including repeal of the Medicaid expansion” created by the Affordable Care Act of 2010, the White House said in its budget overview.

Among the Medicare proposals included in the Trump administration’s fiscal 2020 budget outline are the following: