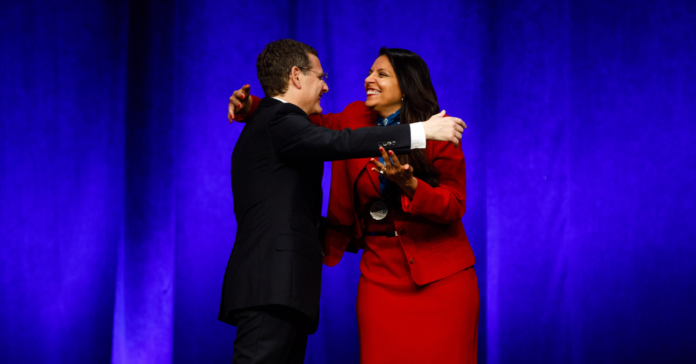 Much has been written about our Board of Directors member, Dr. Arti Hurria, since her tragic death at the end of 2018. Along with many members of the extended ASCO community, leaders, friends, and colleagues, in November my wife and I went to Pasadena, where more than a thousand mourners over-filled the small church as we sought comfort and reassurance from one another. At ASCO and beyond, for many of us not a day has gone by without some reminder of Arti, her work, and her impact, but last week brought it all back into sharp focus as I was asked to talk about the role we at ASCO played in her career during a day-long symposium in her honor at City of Hope. I only had 10 minutes, and her accomplishments and impact could fill days of lectures. But every speaker all day faced the same challenge. Together, I believe we wove a tapestry of her life that none of us could know, or tell, alone.

Reflecting on her career, her work with us at ASCO, and our mission and goals, I described her success at teaching us five life lessons. I hope they resonate with you as you continue to carry on Arti’s legacy and deliver on her vision through your own work.

Lesson 1: Always focus on your goals.

Clearly Arti did. She wanted to be a physician and maybe she had a notion that her time might be limited. I don’t know, and while she never gave any outward suggestion that she was in a rush—she had time and patience for all of us, all the time—she got a lot done, and fast. She completed college and med school both at Northwestern—where she first met our Conquer Cancer Board member Dr. Steve Rosen—in just 7 years instead of the traditional 8 or more. She then trained in internal medicine at Beth Israel in Boston, followed by two sequential fellowships: geriatrics at Harvard and then oncology at Memorial Sloan Kettering Cancer Center (MSKCC). Already displaying her leadership and interpersonal skills as well as her scientific focus, she was selected chief fellow at MSKCC, and began to win competitive research funding.

Lesson 2: Be a social connector.

Having quickly identified gaps in geriatric services and research at MSKCC as a fellow, she joined the faculty and began to design and implement solutions. But Arti simultaneously focused her attention within and beyond her institution. Internally, with ASCO leader Dr. George Bosl as her mentor, she quickly became one of the most completely funded clinical investigators ever. Essentially, she achieved full salary support as a clinical investigator, and this is rare! At the same time, outside of MSKCC, she was building a global network of like-minded geriatric oncologists and researchers. She did this through the Cancer and Leukemia Group B (CALGB, now called the Alliance and led by ASCO president Dr. Monica Bertagnolli), the American Geriatrics Society, and the International Society of Geriatric Oncology, where she later served as president.

Whether it was her innate skills, intuition, plain old hard work, or a combination of all three that made her effective, Arti knew that she would have to further sharpen her leadership skills to make the world better for aging patients with cancer. One of the ways she did that was to enroll in the second class of ASCO’s Leadership Development Program (LDP) in 2010-2011. This “crown jewel” of ASCO first launched in 2009 to fill technical and fundamental administrative and practical leadership training gaps that are still today too common in medical school curricula. It is an immersive yearlong commitment that provides 16 midcareer oncologists with leadership training skills, advocacy experience, networking opportunities, and direct mentorship from senior ASCO members, volunteers, and staff. The participants work in teams and are tasked with addressing a high-priority, strategic initiative identified by the ASCOBboard; their work is culminated the following June when they present their findings and recommendations to the Board before our Annual Meeting. Many LDP graduates go on to serve in leadership roles not just within ASCO (as Arti did), but in other organizations as well.

Arti was a productive researcher, with at least 234 publications. She was also generous and fair as an author, enabling a number of younger colleagues to serve as first authors, an important academic credit. And her extensive production was possible because she competed successfully for resources, winning a 2002 Conquer Cancer Young Investigator Award for her study “Adjuvant Therapy for Breast Cancer Patients Age 65 and Older: Changes in Functional and Cognitive Status,” a 2005 Conquer Cancer Career Development Award that enabled her to develop a cancer-specific geriatric assessment, and many others. She was recognized for her accomplishments with the 2013 ASCO B.J. Kennedy Award and Lecture for Scientific Excellence in Geriatric Oncology, and she became a Fellow of ASCO (FASCO) in 2017. For frame of reference, I am more than a decade older than Arti, but I only became a Fellow of ASCO in 2016—just 1 year before she did!

A member of ASCO since her fellowship in 2001, she went on to serve, by my count, on at least 26 different committees, task forces, and projects—and in an even greater number of leadership roles. She was the first LDP graduate elected to ASCO’s Board of Directors in 2016, unfortunately only getting to serve 2 years of her 4-year term. She was a mentor both within City of Hope and across the globe.

It has been extensively reported that Arti often ended her talks with this saying: “If you want to go quickly, go alone. If you want to go far, go together.” It is clear to me that she actually did both. She went quickly and she went far, and never alone. She is missed by the Board, our entire community, and patients everywhere. But we were fortunate to have ever known her.