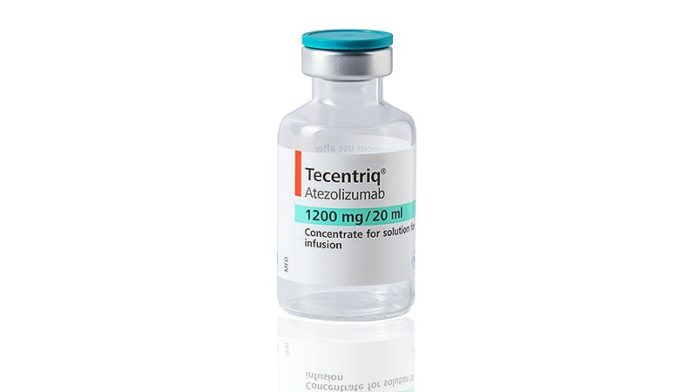 Atezolizumab is the first immunotherapy to be approved for breast cancer.

The approval is based on progression-free survival results and continued approval may be contingent upon confirmatory trial data.

The new approval of the combination is based on safety and efficacy results from the multicenter IMpassion130 trial, which were presented at the European Society for Medical Oncology (ESMO) 2018 Congress and simultaneously published in the New England Journal of Medicine.

These co-primary endpoints were investigator assessed; median follow-up was 12.9 months.

The trialists also performed a subgroup analysis among patients who were PD-L1+, defined as expression ≥ 1% on tumor-infiltrating immune cells. In this analysis, the atezolizumab group consisted of 185 patients and the placebo group 184 patients.

However, Kathy Miller, MD, of the IU Simon Cancer Center at Indiana University, Indianapolis, was uncertain about that conclusion because the OS findings were not final. In a Medscape commentary about this trial, she said: “The authors of IMpassion130 conclude that atezolizumab plus nab-paclitaxel is a new standard of care in the PD-L1-positive subgroup. At this point, I have to say I disagree. What they’ve reported so far is a very modest improvement in progression-free survival. We honestly don’t yet know whether there is an improvement in overall survival.”

The investigators reported that adverse events (AEs) were consistent with the safety profiles of the study drugs; no new safety signals were identified with the combination of atezolizumab plus nab-paclitaxel.

Severe adverse events (SAEs) were reported in 23% of the atezolizumab group vs 18% of the placebo group.