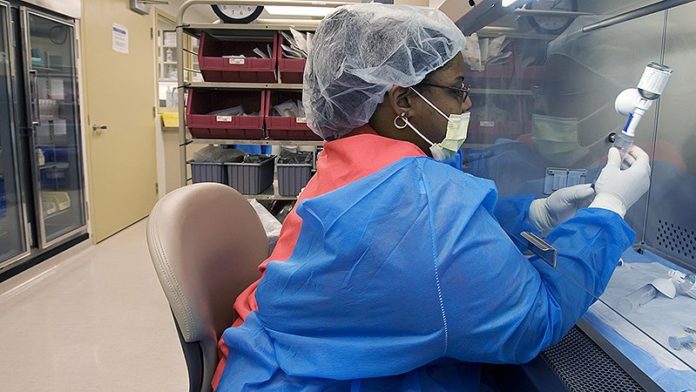 It’s long been known that handling and administering chemotherapy is a health hazard for cancer clinic staff, especially nurses and pharmacists, owing to its potent toxicity.

There is observational evidence that occupational exposure to chemotherapy is associated with conditions ranging from respiratory problems to miscarriage.

However, getting health professionals in the United States to fully use protective gear is not easily achieved.

In a new randomized trial among 396 nurses at 12 American oncology clinics, not even a 2-year educational intervention increased the suboptimal baseline use of protective equipment. The study was published in the March edition of Oncology Nursing Forum.

But the study’s lead author, Christopher Friese, PhD, RN, Rogel Cancer Center, University of Michigan, Ann Arbor, is undeterred. He wants chemotherapy exposure to be given its due attention.

He explained that exposure through minor direct contacts and through vapors is not as obvious as a needlestick but is a “subtle” and “daily” threat to the health of nurses, pharmacists, and other staff.

Above all else, Friese wants to reduce this vulnerability. Innovation in devices and equipment could help, he told Medscape Medical News.

Currently, personal protection typically includes wearing two pairs of gloves during all handling and a thick, disposable gown made from a fabric of low permeability with back closure.

Eye and face protection is also advised when splashing is a risk. A protective respirator is recommended for cleaning spills and for some forms of administration.

However, not using protective gear is common, as indicated by responses to an anonymous poll conducted at the 2016 Oncology Nursing Society annual meeting. More than one third (38%) of respondents reported not changing their gown or double-gloving because this equipment was not conveniently located. Other respondents skipped wearing the gear because it was too uncomfortable.

Unintentional chemo exposures are not uncommon. A 2011 survey, also led by Friese and reported by Medscape Medical News, found that the overall rate of exposure to the skin or eyes during a 1-year period among 402 nurses working in US outpatient settings was 16.9%.

A 2012 published record of a site visit at a Florida cancer clinic by inspectors from the National Institute for Occupational Safety and Health (NIOSH) reveals how housekeeping, clinic design, and even personal grooming might result in exposures.

The inspection was prompted by a confidential request from a clinic employee, who had reported upper respiratory symptoms, rash, diarrhea, migraine, and headaches among employees.

The NIOSH report includes a photo of a counter area where chemotherapy bags are stored in the open. Directly above the bags is a rack where personal protective equipment (masks and goggles) is hung on hooks, also in the open. In other words, protective gear was stored inches away from a potential source of toxins, with no barrier.

The report also details how easily an exposure can occur: “One employee was observed handling a chemotherapy drug and using her gloved hand to brush her hair away from her eyes.”

Are Nurses Neglecting Themselves or Being Neglected?

Alison Trinkoff, ScD, RN, of the University of Maryland School of Nursing, Baltimore, who has written about nurse safety, believes part of the problem with chemo exposures is that nurses may be neglecting themselves by not adhering more closely to safety practices.

“Nurses are generally very ‘other’ focused or patient focused and not so much focused on themselves,” she told Medscape Medical News.

However, Trinkoff also strongly emphasized that, unlike dealing with infectious materials, taking precautions with chemo is “not generally something that is stressed in the workplace.” In other words, systemic neglect is at work, she suggested.

Nurses are often in the dark about the health hazards of chemo exposure, said Samantha Toland, NP, RN, and Alison Simons, RN, of the School of Nursing and Midwifery, Birmingham City University, United Kingdom, who have studied oncology nurse health complaints.

“Generally we do not think nurses are always fully aware of the risks to their health, certainly in the longer term,” they told Medscape Medical News in a joint email.

Perhaps more ominously, they added that nurses “may not attribute health issues to the fact that they have been handling chemotherapy agents.”

The knowledge gap includes the mechanisms of chemotherapy’s toxicity, the two lecturers say: “Nurses do not fully understand how or why this risk is posed — and that the drugs are in some cases carcinogenic, mutagenic and teratogenic.”

However, on its news website, the Oncology Nursing Society suggests there is some understanding of the stakes.

The society says it “commonly” receives questions in its clinical inbox (clinical@ons.org) about whether nurses who are pregnant, breastfeeding, or trying to conceive can safely administer or handle chemotherapy and other hazardous drugs.

“Although consistent and thorough use of primary engineering controls and personal protective equipment when handling hazardous drugs minimizes risk of occupational exposure, it does not eliminate it (Polovich, 2011). Because of the increased susceptibility for harm, an added level of protection is needed for nurses who are pregnant, breastfeeding, or actively trying to conceive.”

One of the reasons that some nurses are aware of reproductive risks linked to chemotherapy exposure is an often-cited 2012 study.

The authors, who were from NIOSH, retrospectively collected information about pregnancy outcomes and occupational exposures from 8461 participants of the Nurses’ Health Study II.

NIOSH has attempted to analyze and draw attention to chemotherapy exposure among nurses, said Thomas H. Connor, PhD, a recently retired research biologist at the agency, which is part of the Centers for Disease Control and Prevention, in an email to Medscape Medical News.

For example, he pointed to a 2004 NIOSH alert “published about hazardous drugs, including antineoplastic agents.”

The alert includes a graphic introductory box: “Warning! Working with or near hazardous drugs [including chemotherapy] in health care settings may cause skin rashes, infertility, miscarriage, birth defects, and possibly leukemia or other cancers.”

Participants self-reported about the use of gloves and gowns and administration of antineoplastic drugs within the past month (among nonpregnant nurses) or within the first 20 weeks of pregnancy (among pregnant nurses).

More than a one third (36%) of the large study population had handled chemotherapy, the study found.

No Level I Evidence

About half of UK nurses experience symptoms related to chemotherapy exposure, suggests a 200-nurse survey conducted in 2017 by Birmingham’s Toland and Simons.

The survey, which was anonymous, prompted nurses to remember whether adverse events occurred during or after the preparation and administration of chemo. Nearly half (46%) said they had experienced some ill effect.

The two researchers pointed out that it makes sense that only some nurses experience symptoms because, as with patients, adverse events are not universal.

There is a national registry for needlestick injuries, but no such registry exists for hazardous drugs. Dr Christopher Friese

Despite this and other published reports, there is no level I evidence that chemotherapy exposure causes specific illness in nurses.

Michigan’s Friese explained that there are few funding sources for large-scale occupational health studies. “Studying health effects in workers takes a long time and is costly,” he said.

An alternative strategy, said Friese, is to establish a registry where workers can report hazardous drug exposures, including from chemotherapy, and report long-term health effects.

“There is a national registry for needlestick injuries, but no such registry exists for hazardous drugs,” he said.

Toland and Simons believe the profession of nursing can do better — or at least as well as pharmacists, whom they credit as having strong guidelines and practices.

“We know that pharmacists would generally not carry out some of the tasks nurses do without the addition of more robust protective measures. Possibly if medics [physicians] handled chemotherapy, more research would have been carried out and measures adopted,” they said.

In the United States, experts point out that NIOSH does not have the authority to ensure that hazardous drugs are being safely handled. However, the Occupational Safety and Health Administration (OSHA) could, but it does not have the resources to do so.

A Long History of Delayed Concern

The poisonous properties of cytotoxic drugs have been known since the 1940s, when they were first used in oncology and were described in a 1946 study of nitrogen mustard therapy for blood cancers.

However, it was not until 1979 — nearly 4 decades later — that the first article described an increase in mutagenicity in genetic material found in the urine of nurses handling cytotoxic drugs (Lancet.1979;1:1250–1).

“This was the first demonstration of the potential occupational risk involved in the manipulation of these medicines,” write the authors a 2018 review article on the safe handling of cytotoxic agents.

Governments and major organizations finally acted on the information. In 1981, the Society of Hospital Pharmacists of Australia published the first guide for the safe management of cytotoxic medicines.

“This is an old problem,” summarized Michigan’s Friese, who wants further action to be taken in the United States.

“While there is a renewed conversation about this problem, we haven’t seen approaches enacted to address it,” he argued.

Friese and his coinvestigators of the recent, failed randomized clinical trial, which attempted to increase use of protective gear among nurses, have three recommendations:

A lot of healthcare workers are affected, said Friese. NIOSH estimates that as many as 8 million may handle hazardous drugs.

Furthermore, “use of hazardous drugs has expanded beyond oncology settings,” emphasized Friese.

“It’s time…to reexamine the issue of hazardous drug exposure. Both leaders and frontline clinicians need to work together to make sure the people handling these drugs are doing so as safely as they can,” he said.

The study was supported by NIOSH. The authors have disclosed no relevant financial relationships.

When Do Cancer Cases Become a Cancer Cluster?

Number of US Cancer Survivors Grew to Over 18 Million